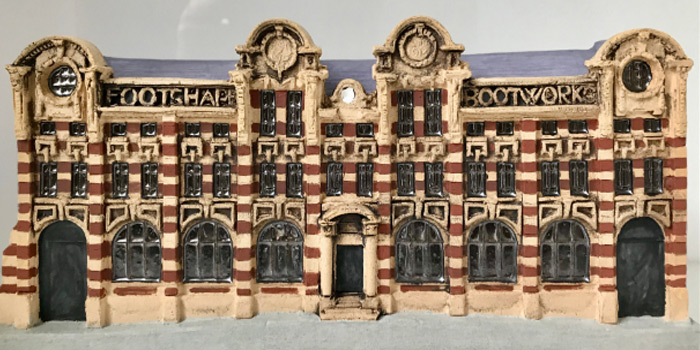 Many of you will know Mark Draper and be familiar with his work as an Architectural Ceramist. He has been a member of Friends of 78 since the group was set up, and indeed has kept copies of all the newsletters that have been published.

His fascination with 78 Derngate started in 1966 when he began secondary school in Northampton and his bus passed by the building. He knew nothing about Charles Rennie Mackintosh then but that front door captured his imagination, a door that he would go on to recreate in model form many years later.

After attending Northampton’s Eaglehurst College, Mark studied at Kettering Technical College on an Arts Foundation programme. This was followed by a course in 3D Design at Leeds and a post graduate degree in furniture design and technology at High Wycombe.

Following a brief time as an architectural assistant in London, he set up a ceramics department at Hinwick Hall F.E. College and trained as a teacher. He moved to the Wellingborough College in 1990 with responsibility for the arts curriculum within the special education provision. When the College merged with Tresham Institute, Mark also lectured on the Interior Design course run jointly with De Montfort University, Leicester. When he lectured on the first year of De Montfort’s degree course in Interior Design, Rob Kendall gave him and his students a guided tour of 78 before the renovation work began.

Mark returned to Hinwick Hall College in 2002 where he organised collaborative projects with the Victoria and Albert Museum and was appointed by the Equality and Human Rights Commission as a judge for their national project, Young Brits at Art, 2009.

Early retirement came in 2009 and since 2011 Mark has been making clay models of favourite and, in some cases, very famous buildings at his studio at Rushton, Northamptonshire.
The processes involved in creating each and every model are intricate and labour intensive. Mark visits the building to be modelled to get a feel for the place. His first hand observation informs the decision making throughout the duration of the project. Sketches and photographs accompany the visit and although, on very rare occasions, Mark has access to the original drawings, he prefers to make all his own architectural drawings.

After satisfying himself that his drawings are accurate, he then constructs a 3D card maquette. Mark has the experience of over ten years and 33 projects so, as you can imagine, he has learned a few techniques along the way. Mark keeps everything connected with his model-making including his working drawings, although some are archived with the University of Cambridge and The National Trust.

Many more stages follow – making a press mould, constructing the clay master and mould for each elevation, making the prototype, assembling the pieces, drying out the model, first and second firings. If any colour needs to be added, this is fixed on the second firing. Obviously, this is a very condensed account of the model’s construction and Mark has produced much more detailed notes on all the processes involved.

The bookends depicting the front and back elevations of 78 Derngate were made between April and June 2015. These can be purchased from the shop at 78 and as can be seen from the attached photograph are a stunning example of Mark’s work. Mark does not undertake commissions but has chosen to donate his work to diverse institutions, including the University of Cambridge and various National Trust properties.

Some of the models executed by Mark in recent years are the Triangular Lodge, Rushton, Lyveden New Bield, both in Northamptonshire and Emmanuel College and Trinity College Library, both in Cambridge. The most recent work is Cliveden and as you can see from the photograph is absolutely stunning. Mark spent 329 hours on the Cliveden project. This was an exceptionally large piece of work which was effectively nine components or models that make up the whole piece.

Now comes some really exciting news! As you probably know, the Scottish Architect, Alexander Ellis Anderson long-time resident in Northampton, did the original drawings and plans for the re-modelled interiors in 1916 for Wenman Joseph Bassett-Lowke. He also designed many other buildings in Northampton and some of you many even have had the opportunity to accompany Rob Kendall on one of his Alexander Ellis Anderson walks, taking in many of the architect’s constructions.

Mark is modelling two of the architect’s buildings: the Barratt Footshape Boot Works in Kingsthorpe Hollow and the Taylor Memorial Hall in Castilian Street. The former was completed in 1913, and carries Alexander Ellis Anderson’s distinctive rose motifs in the stained glass windows and raised pediments. The factory is now offices. The Taylor Memorial Hall c.1919 was built in memory of Second Lieutenant Ralph Patron Taylor who died in 1916 at the Battle of the Somme. Later uses include accommodation for the Y.W.C.A. and it is currently a wine bar.
Four models of the Footshape Boot Works have now been donated to 78 Derngate to help raise funds for the Atrium Project with a similar number of models of the Memorial Hall following in the early part of 2021. The Barratt building is extremely impressive and Mark’s model is a true reflection of this as you can see from the photograph. Details of how these generous gifts from Mark will be marketed will be published shortly.

Mark has exhibited at the Sir Alfred East Gallery in Kettering, Northamptonshire and staged a major exhibition at 78 Derngate in 2014. He considers it a huge honour to have been granted this exhibition, considering, in his words, “the building’s association with the world renowned Bassett-Lowke”. Well, 78 Derngate is honoured and proud to have had Mark exhibit here; Bassett-Lowke would probably have been fascinated, with his love of models and model-making, to have a local artist sharing his own take on the model world.

Who would have thought that the school boy looking out of the bus window at that iconic front door, probably pale blue then but since the restoration now its original black, would later in his career, not only be making replicas of that door and other models linked with 78 Derngate’s history, but become a Friend in every sense of the word!

A postscript from 78 Derngate’s House Manager Liz Jansson
Mark’s model of the Barratt Works Building is now available to buy at 78 Derngate - price £125.
Now is also a good opportunity for me to reiterate that we are OPEN and that it is the perfect time to come and pay a visit to the house, gallery, shop and dining room (as long as bookings are phoned ahead).