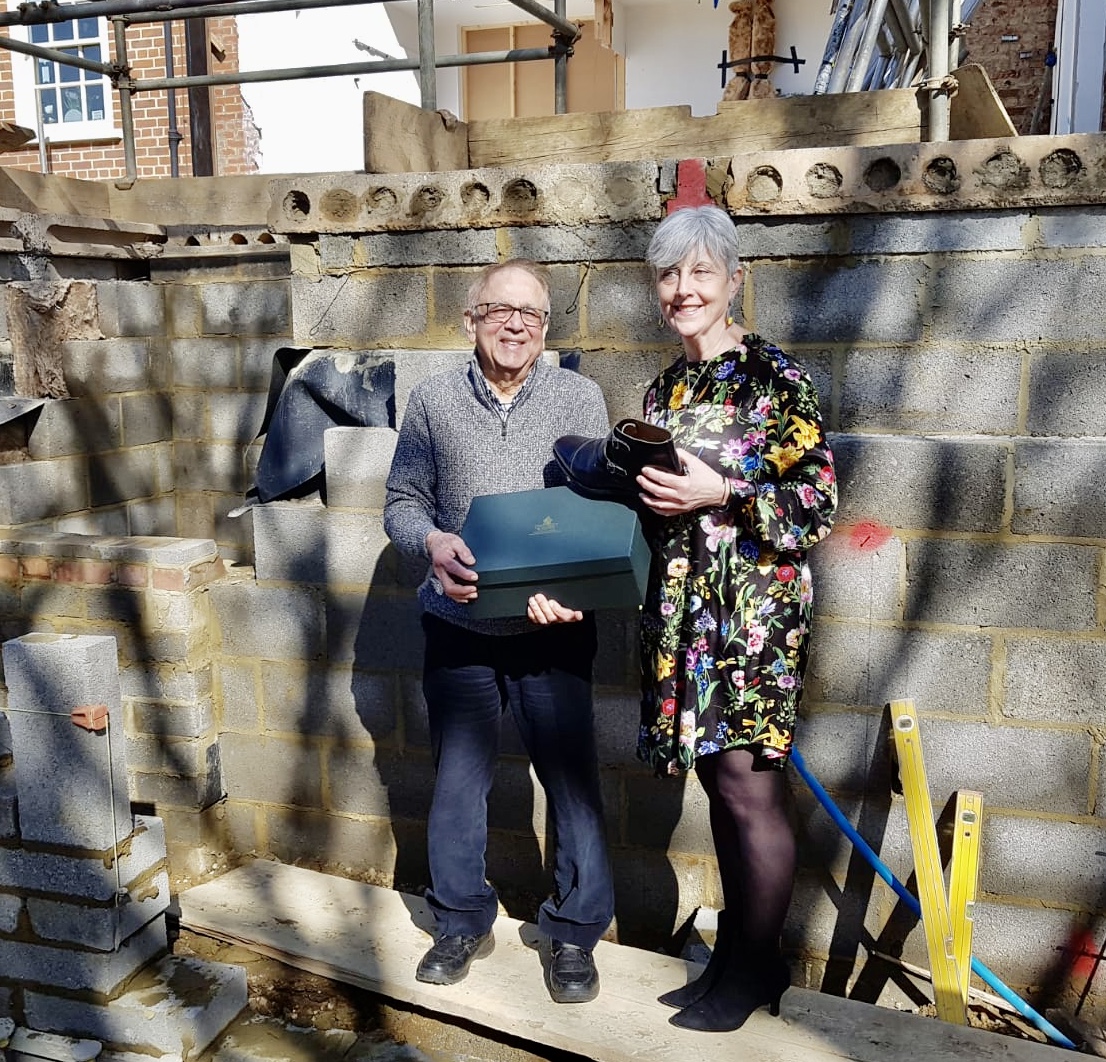 Having heard from one of our volunteers about a recent, fascinating talk given by Rebecca Shawcross, NMAG’s Senior Shoe Curator, on the practice of concealing shoes in buildings, we got in touch to learn a bit more as it seemed a fitting tradition for us to carry out whilst our new extension is being built.  Thinking outside the (shoe)box, and bearing in mind the connection with that established company and our very own Florence Jane Jones (daughter of Charles Jones, founder of said firm), we contacted Crockett & Jones to see if they might be prepared to donate a flawed shoe or shoes for the occasion. They were very pleased to be of service and we were unexpectedly presented with a pair of smart men’s shoes, which were slightly damaged, in a gorgeous C&J box. To make it more of a time capsule, we added a small 78 Derngate-inspired wall-hanging, a 78 pin badge, a newspaper, an empty bottle of Becket beer and a piece of text on headed paper about the connections with Crockett & Jones and Bassett-Lowke, owner of 78 Derngate. It was on a warm spring morning that Rob Kendall, Les Patterson, Mick Young Chair of Trustees, Cllr Alison Eastwood, Trustees Arun Kotnis, Sheila Harris and Les Marriott and house manager, Liz Jansson stepped out onto the building site and presented the box/time capsule to site manager, Matt to conceal within the new steps. For context, here is an extract from Rebecca’s email outlining the details of hiding shoes within buildings:

In the 1950s Miss June Swann, former Keeper of the Boot and Shoe Collection at Northampton Museum and Art Gallery noticed that footwear was being regularly brought in for both identification and donation that had been found in unusual locations within buildings, such as up chimneys, within roof spaces and walls and under floorboards. It was happening too frequently for it to be ignored so to try to explain why shoes should be found in non-accidental locations she began to record all finds to gather the data to try to eventually explain this phenomenon.

In 2016-17, the University of Hertfordshire collaborated with NMAG to digitise the Index, producing a dataset that is both more accessible and more searchable. At its most recent count, the digitised Index contains a total of 2980 separate find entries detailing over 3,000individual shoes plus all the other objects that have been found with them.

There have been many theories over the years about why shoes were deliberately hidden. One is that they are very personal items and, when well-worn, contain - it was thought - the essence of the wearer. Infused with the good spirit of the wearer, once hidden in a perceived weak spot in the house – above doors and windows, in the roof space and in chimneys - the good spirit would help ward off any evil spirits that might try and harm the house or its occupants. This was the view for a long time and could still be a reason. But shoes were expensive items and in trying to give them as much wearable life as possible were more likely to be handed down, repaired and altered until they were no longer able to be worn. They were then discarded in the easiest way possible.

The general view is that it is unlikely that the occupants who hid them but a practice that builders might do during renovations to bring good luck in their work.

Current thinking suggests thinking less and less that they were specifically apotropaic items, ones that have the power to avert evil influences or bad luck – and that they were connected to notions of good luck and hope.

Iconic Northampton Heritage Sites Team up to Offer Day Out for Groups
In Support of Ukraine
Paint the Town in Colour!
Northamptonshire Guild of Designer Craftsmen & Konsthantverkarna i Örebro Län
The extension build begins!